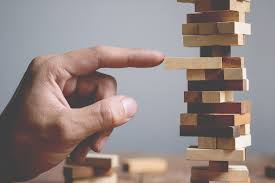 In the game of Jenga, it’s not if the tower is going to fall down, it’s when. Players take turns removing blocks, trying not to be the one to cause the tumble while also using the removed blocks to make the tower higher.

The game came to mind today when I was thinking about the toxic build up we so often allow to take place in our most important relationships; the small hurts, the sleights, the passive aggressiveness, the stubborn refusal to apologize, the feelings of victimization.

At home, at work, wherever we are emotionally invested, these little moments which we can so easily write off as “water under the bridge” don’t just wash away; they accumulate and they calcify. Like a hardened artery, they make us perfect candidates for a very painful reconciliation.

We need to learn how to “reverse Jenga” this process. We have to be vigilant in knocking the bricks down, one by one, so that the tower grows smaller and smaller. I’d like to suggest that we can eliminate it altogether but my reality checking self understands that it’s hard to be human, and that it can be especially hard to be human in relationship with other humans. We are going to mess up and hurt each other.

It’s rare that pile of rubble is considered a good thing, but sometimes you have to knock down something old to build something new.