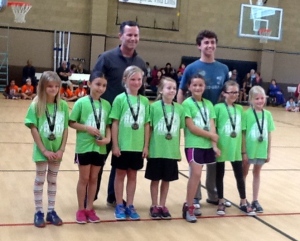 Everything I read about coaching 8-year-olds in basketball says that the emphasis needs to be on having fun. Those who take the time to write about such things emphasize that a coach’s first and most important job at this level is to help the kids discover their athleticism by making it so much fun that they fall in love with it and can’t wait to come back, next practice, next season, et cetera. Put another way, no one suggests teaching the crossover dribble or the fade away jump shot.

When my daughter, age 9, decided she wanted to play a second season of recreational basketball I responded enthusiastically. Her first season was a steep learning curve – fun but steep – and I couldn’t be sure how she would feel about giving it another try. Flushed with excitement I made a commitment to her that I would be an assistant coach for her team. I noticed the year before that her coach would have benefited from some help and I regret not stepping up to support him. Not so this year. I was ready to pitch in.

What veteran parents of recreational sports will tell you, and about which I was impressively naive, is that there is rarely if ever such a thing as an assistant coach at this level. The parks and rec folks just need coaches, period. When you offer to be an assistant it’s only a matter of time until you’re handed the whistle and clipboard and given a battlefield promotion. I was no exception. Making lemonade from the lemons I hadn’t wanted to pick, I invited my son to help me out and figured that I could not only have an experience coaching my daughter but also the camaraderie of working alongside my son.

Consulting my online coaching resources I mapped out a plan that emphasized fun – lots of running around, lots of games, lots of silliness. Since my technical basketball skills are limited I went with my strength and gave the girls as much positive energy and enthusiasm as I could muster. From the very beginning our coaching approach was a big hit. Thanks to those great suggestions I found the girls laughed their way through “drills” that were cleverly designed to be the building blocks of their athletic development.

I loved basketball as a kid. I played in leagues, with my buddies or just by myself in the front yard. I would stay outside well after dark, shooting free throws for as long as it took to make ten in a row. Reclaiming this childhood passion, pairing it with my aptitude for motivation and inspiration and then channeling the combination to this team was deeply gratifying. Until the games started. And we didn’t win any.

I’m not sure what the formula is for putting teams together at this level but it became evident with each team we faced that we were always going to be smaller, younger and less experienced. And while this could sound like an excuse or even sour grapes it was just the fact of the matter. As the losses piled up I began to question my strategy. I began to question whether or not my focus on learning the fundamentals through fun, energy and enthusiasm was most important after all. I found myself reverting back to well-developed feelings of competitiveness and intensity, exasperation and frustration. When everyone around you seems to be reading from a different script – and getting different results – it can wear after a while. It did with me. As best I could, I kept all of that to myself for the one reason that mattered most: my players didn’t care. The fun strategy was working for them just fine. Since most of these girls were new to basketball they were too concerned with just being on the court much less with winning or losing. They just wanted to play.

After our sixth or seventh game a grandmother of one of the players came up to me and said, “Those girls are just doing the very best they can. There’s nothing more you can ask than that.”

I will never again doubt the multiplying effect of energy and enthusiasm. They are infectious and vital to learning.

And it’s worth remembering that most of the time, most people are doing the best they can.

4 thoughts on “The Best They Can”