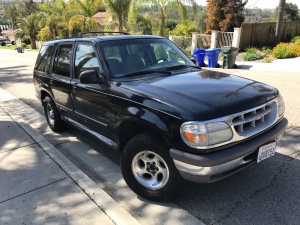 Today, as his mom drove him to the airport, I placed an ad on Craigslist to finally unload the oil leaking, teenage boy smelling, no longer welcome around here but super grateful for its faithful service, 1997 Ford Explorer.

I was hoping to just get the process started but in a few hours I had a dozen inquiries and one appointment. The first guy who saw it, bought it. And pretty darn close to my asking price. All on a Friday afternoon.

As good as that is, it’s not the best part. As he’s walking away from our house, money exchanged and title transferred, the guy looks back at me and asks, “Does it have a name?”

This made my day.

I was so glad he would even think to ask, but I didn’t know. As he drove away, I quickly texted my son to discover that, yes, she has a name. It’s “Dora the Explora.” Of course it is.

My son named his car. The guy who bought it wanted to know.

I feel good about that. I feel good that people want to take the transactional and make it meaningful. Maybe its evidence of the faulty wiring of Homo sapiens that we do stuff like that. Maybe it’s evidence of our genius.

It’s hard to say, but it’s fun. And fun, just for the sake of it, is a really good thing.