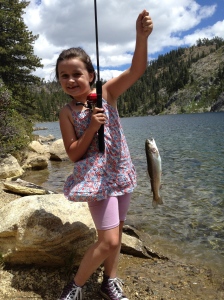 In June, 2013 the fishing was easy. I assembled a couple of $20 Wal-Mart rods, put some bait on their hooks, dropped them in the water and within five minutes my girls had each caught their first fish. Easy, peasy.

Sort of like the new golfer who hits his first shot perfectly and wonders what all the fuss is about.

In late July of this year we returned to the lake, ready for more of the same. We set up the same rods in the same way, attached the same bait to the same hooks, dropped the lines in the water and readied ourselves for the action.

And nothing happened. For pretty much the entire afternoon.

Because the conditions were definitely not the same.

After a couple of hours of futility a kind man walked over to us and asked if we would mind some advice. “What advice could we possibly need?” I wondered, both defensively and quietly.

I replied, “Sure, that’s very nice of you but what I don’t understand is that last year we showed up, dropped in our lines and caught fish and this year, nothing.”

“What time of year was it?” he asked.

“You were early in the season. By this point in the summer the water has warmed up enough that the trout are at the bottom of the lake.”

The trout had adapted to the changing conditions and we most definitely had not.

When I looked around I realized we were the only ones using bobbers, that little thingamajig that keeps the hook from sinking and that disappears when a fish is on the line. The other anglers (I know, a pretentious term, but how often do I get to use it?) were using heavier weights, smaller hooks and definitely no bobbers. And that’s what our neighbor had come over to let us know. But not just let us know, to also offer and to actually reconstruct our lines to help us catch some fish!

“I’d just like to see your kids catch some,” he said. Yeah, I know the feeling.

The payoff wasn’t immediate but we stuck with it and the next day hauled in eight rainbow trout. (Directions: pan fry in flour, salt and pepper. Delicious!)

You might think it will work again because it worked before. When it doesn’t, don’t be too surprised. Take a look around and see if you can notice what’s different and if you’re able, adjust accordingly. If that doesn’t work be sure to say “yes” to the kind stranger who offers to help.

Unless, of course, you’d like him to catch all the fish.

One thought on “A Fish Story”