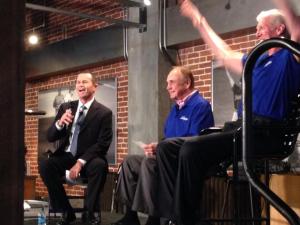 On Tuesday evening of this week I found myself onstage with legendary broadcaster Dick Enberg and hall of fame basketball player, Bill Walton. My role was to moderate a conversation about what it takes to be a “game changer” with two people who have seen, experienced and created countless game changing moments at both the collegiate and professional level. This conversation was held in the context of a servant leadership conference, the goal of which was to educate and challenge participants to go out and “change the game” in their organizations by leading both from the heart and the head.

The thing is, I was never supposed to be there. You see, I was pinch-hitting, informed a day earlier that I was filling in for the conference host who had fallen ill. I was stepping in for a man who was missing out on a childhood dream to talk with these two hall-of-famers. I can only imagine his disappointment.

Instead, they got me.

Was I nervous? At first, I thought I would and should be. After all, I was going to talk with two legends, on camera, under the lights and in front of about 300 people. But the more I considered it the more I realized I wasn’t nervous at all. Not one bit. Here’s why:

1. I know Dick Enberg and Bill Walton. Not personally of course but, for the purpose of a 75 minute conversation I reminded myself of what I did know: first, Dick Enberg is a broadcaster, for goodness sake! He’s been talking for a living for nearly 50 years. And, Bill Walton is one of if not the most verbose people you could ever possibly encounter. They had a half-century of experiences to share and they didn’t need any help from me.

When you find yourself in an unexpected situation, even a little bit of information counts for a lot.

2. I knew the subject matter. I was a co-host for the conference and even though this particular session wasn’t on my duty roster I had certainly given some thought to the relationship between effective leadership and athletic achievement. The conference was held next door to a baseball stadium with the theme “Changing the Game,” for what it’s worth. I figured with even limited preparation and a little imagination I could find my into and through a meaningful conversation.

When you find yourself in an unexpected situation, trust your competence.

3. I know when to shut-up and listen. The fact is, I was completely superfluous to the discussion. Besides some brief and respectful introductory remarks and something similar at the end, I asked two questions in 75 minutes. Did I know that Dick and Bill have known each other for over 40 years? Nope. Did I know that they are proud members of the mutual admiration society? Nope. Did I know that they would set one another up for anecdote after anecdote, layering one story on top of another as if constructing a perfect lasagna? Nope. And so, I shut-up and listened, enjoying the fact that I had the best seat in the house and I might as well make the most of it. That picture up there makes it look like I was smoothly in charge of the whole affair, coolly brandishing my microphone in between thoughtful questions and dialogue with a couple of superstars. It was no such thing. A picture taken at the right time can make anything seem true.

When you find yourself in an unexpected situation, sometimes you just need to shut-up and listen.

At one point during the event Bill Walton told a story about a guy who was moderating a conversation he was a part of when he stopped mid-sentence, pointed at me and said, “Kind of like Kevin is supposed to be doing!” As the crowd laughed I attempted to remind him that my name is “David” only to have Dick Enberg chime in with: “You’re the most overpaid guy in the room!” A very funny moment. A great dose of humility.

When you find yourself in an unexpected situation, it never hurts to remind yourself that it’s not all about you.

It really never is.

10 thoughts on “When in Doubt, Shut-up and Listen”