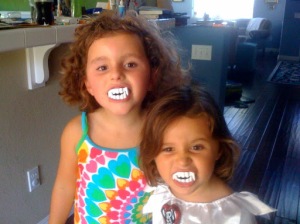 I have been massively anal retentive about my teeth for as long as I can remember. I’m guessing I have a pretty good shot at the Guinness book of World Records for consecutive days of flossing. It’s probably a twenty year run at this point. I brush twice a day, once with a manual and once with an electric, and I go to the dentist at least three times a year. I know, it sounds like some sick fetish but I’ve got a genetic predisposition to plaque buildup and I’m desperate to avoid the really deep cleaning. Also, I’m a control freak, but more on that in a minute.

When I was a child, around 5 or 6 years old and living in the Bay Area (that reads funny, as if I struck out on my own, found a cool flat over my kindergarten and joined the city’s subculture of innocents), my older sister worked in a dentist office in San Francisco. I was deathly afraid of this place because she and her colleagues put the fear of God in me that if I didn’t take care of my teeth, my teeth would rot in my mouth and I would rot in hell. Impressionable young lad that I was, this successfully planted itself as a permanent, non-negotiable part of my make-up.

Given this backdrop it should be fairly easy for you to draw some conclusions about how I approach my children’s dental hygiene. Yes, I’m intense. I brushed my son’s teeth until he was about 6 or 7 years old. Now, of course, he doesn’t do it right, has two cavities to show for it and is no longer getting any Christmas presents.

As for my daughters, ages 6 and 4, I have been brushing their teeth from the beginning. And just a couple of months ago I finally hit the wall, exclaiming to my wife that I hate brushing the kid’s teeth and I don’t want to do it anymore. A couple of months later I realized, in a blindingly obvious insight, that I actually don’t have to brush their teeth anymore. I could (GASP) teach them to brush their own teeth! And, this is where the control freak comes in. I already made this mistake once and dare not to be burned again!

In spite of this internal resistance, I have started small and started slow. I told the girls that it’s important (all quality concerns aside) that they learn to brush their own teeth. They looked at me with sweet confusion, like “Really, Dad? You’re going to stop squeezing my cheeks, bending my neck backwards and jamming me in the face with my toothbrush? How could I ever let that go?” I reassured them that this was both really important and that I would still be available to help them. Now I help them get the toothpaste on the brush and then give them a few minutes to do their best before I squeeze their cheeks, crane their necks backward and jam them in the face. That, ladies and gentlemen, is what we call progress!

I can’t let them do it on their own, I just can’t. It sicks me out. And, I have to let it go. I really do. It’s no fun for me and, though I know they would really rather have me do it (see the dependence I’ve created!), I don’t think it’s much fun for them either. Problem is, I haven’t made it clear to them what’s at stake. Better have them talk to their brother.