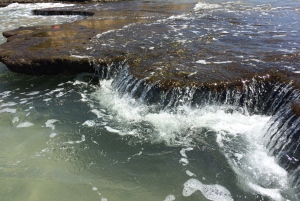 The edge of the brownie is the best part. Everybody knows that.

The edge of the cake? That’s where all the frosting is.

The edge of the pie, where the crust is golden brown, is clearly the most satisfying.

How about cheesecake? Where the graham cracker crust meets the cream cheese? Definitely the best.

Oh, and on a perfectly cooked piece of prime rib, that crispy, lovely edge that just melts in your mouth? Well, that’s a whole lot more satisfying than the plain stuff in the middle.

What I’m getting at is that the edge is where the action is. And, there’s more than just extra calories preventing us from hanging out there more often. We learned early on to stay safe. Here’s an experiment that proves it (courtesy of creativity expert, Kobus Neethling):

Find a mom of a baby who is actively crawling. Find a nice big room and put mom and baby in the middle of the room. Ask mom to let the baby crawl around the room. It’s just about certain that before that baby ventures too far away (and you know she’s headed straight for the most interesting – dangerous? – thing she can find) mom is going to pick up the baby and bring it back to the center of the room. Makes sense because that’s mom’s job. Keep the baby safe. This only becomes a problem when it becomes over-learned.

Think of how this shows up within your organizations. The level of paternalism is staggering. Under the umbrella of “we don’t want them to get hurt” too many leaders are keeping people in the middle of the room instead of sending them out to the edges to where the good stuff is waiting. Maybe it’s their own fear of the edge that they are projecting onto their teams. Maybe it’s a lack of imagination and curiosity. Whatever it is, it’s limiting the resourcefulness and learning of the organization and that’s no good in the midst of constant change.

The answers to so many of our new questions are not going to be found in the old playbook, the one that sits squarely in the middle of the room. And, why would we look for them there anyway? The middle is crowded. Most everyone’s already there. On the edge there’s elbow room. Room to breathe, to think, to relate, stretch, explore and create.

Yes, on the edge there is risk. Not of falling but of becoming. Ideas played out, gifts revealed, practiced and refined. Where failures become the best lessons.

This is not about recklessness or fearlessness. This is about the individuals who make up the organization, not the organization itself. This is about taking action in spite of present fear. Creating the space for bigger, more expansive living. Encouraging lives of courage and exploration the primary questions being: how much contribution can I make? And, how will I make it?

DAVID BERRY is the author of “A More Daring Life: Finding Voice at the Crossroads of Change” and the founder of RULE13 Learning. He speaks and writes about the complexity of leading in a changing world, especially the parts where he doesn’t handle it very well.