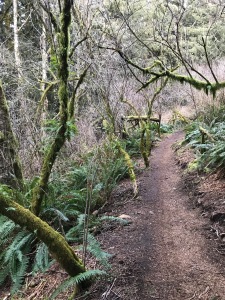 I went to bed last night feeling frustrated about something that did not turn out as planned.

During the night, I had a nightmare in which a former mentor would not speak to me, and when he finally submitted to my pleading, accused me of having an affair with another man’s wife.

I woke up this morning still feeling frustrated only now with the added layer of dread from the nightmare.

So, I did what I do, and got out on the trail for a short hike before the onset of the workday.

Along the trail I received a call with a fresh dose of disappointment, another plan that was not to be. My morning workout is supposed to dissipate my anxiety, not add to it, so I spontaneously asked myself the most relevant question at hand:

“What the fuck is going on?”

I kept walking and kept thinking, kept thinking and walking. I called a friend who accelerated my insight. I walked some more and then it became clear:

My idealism is out of whack.

When I aim it too high it becomes inseparable from my identity, making any breach a personal blow.

When I hold it too low, it is a capitulation to the dark allure of cynicism.

I’m convinced that my old mentor showed up in my nightmare, sandwiched between disappointments, to bring this to light. I idealized him to the point that I lost sight of the possibility of another story, the one in which he walked out of my life so completely that I never heard from him again. He ghosted me.

In the midst of this memory, I arrived at a brief section of moss-covered trees. It felt like a gauntlet, but instead of competitive or aggressive, it was sturdy and healing. For a moment, I stood and listened, and was reminded of this:

“Between stimulus and response there is a space. In that space is our power to choose our response. In our response lies our growth and our freedom.” – V. Frankl